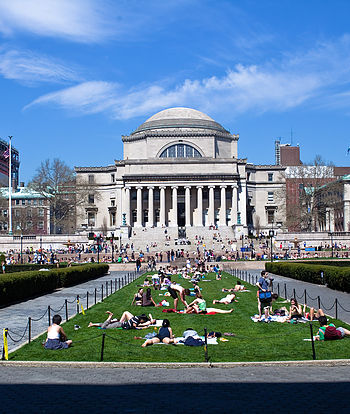 Columbia University in the City of New York (Columbia University) is a private, Ivy League university in Manhattan, New York City. The University was founded in 1754 as King’s College by royal charter of George II of Great Britain. After the American Revolutionary War King’s College briefly became a state entity, and was renamed Columbia College in 1784. It is one of the oldest institution of higher learning in the state of New York, the fifth oldest in the United States. Columbia has students close to 20,000 currently.

Its educational goal is to “train the young generation becomes talents with profound cultural and scientific knowledge and superior language skills”. Columbia not only has advanced hardware, but also a group of renowned scholars which attracts a large number of visiting scholars to here each year and makes it a high scientific and academic strength of the university. In 2011, the university was ranked #4 by U.S. News & World Report.

For 2011, the university was ranked #4 by U.S. News & World Report nationally. Its disciplines of medicine, law and MBA are outstanding, while its natural science disciplines, such as chemistry, biology, computer, geography, etc. are also at the forefront. The Columbia Business School was ranked #3 by The Wall Street Journal in 2011, the characteristic of its MBA courses is “flexibility”, students can commence study in January, May or September, it is relatively popular for the overseas students. Its curriculum is very ambitious, in particular the establishment of four themes in Globalisation, Total quality, Ethics and Human Resource Management which was named the “21st century curriculum”. The Teachers College is a comprehensive graduate school of education, applied psychology and mental health, and was ranked #2 by U.S. News & World Report in 2011.

Columbia was founded in 1754, is a member of the Ivy League, one of the oldest pretisgious U.S. universities. Its comprehensive academic standards is always among the nation’s top ten. In addition, the university is very concerned about its alumni’s social resources development, it also strengthens alumni’s ties globally. Almost 100,000 of alumni donate large amount of supplies and fundings to the university’s education research and development each year. Columbia received the largest donation ever for a total of US$ 20 million to support the Independent Schools of Education programme in February 2008.