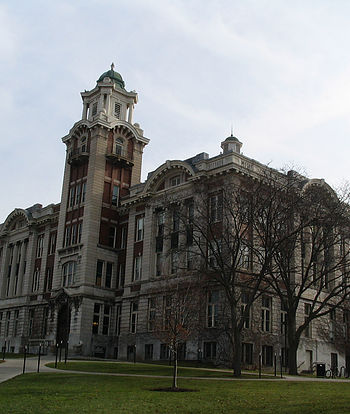 Syracuse University (also referred to as SU, Syracuse, or ‘Cuse) is a private research university located in Syracuse, New York, United States. It was founded by the Methodist Episcopal Church in 1832. Following several years of debate over relocating the college to Syracuse, the university was founded independent of the college in 1870. Since 1920, the university has identified itself as nonsectarian. Its Latin motto is “Suos Cultores Scientia Coronat”, which means “Knowledge crowns those who seek her”. Its college colour is orange.

The school’s independent student newspaper is The Daily Orange, founded in 1903 and independent since 1971. It has two radio stations: WAER-FM and WERW-AM, and a campus television network Hill TV.

Official name for SU’s sports teams is “the Orange”, the mascot is Otto the Orange, all the school sports teams participate games in the Division I, Big East Conference of National Collegiate Athletic Association. Men’s basketball, football, lacrosse play in the Carrier Dome (the largest university stadium of the nation and the largest stadium in the northeast U.S.A.).

Syracuse is a city in and the county seat of Onondaga County, New York, United States, the economic and educational hub of Central New York. It stands tens of miles from the southern Lake Ontario of the Finger Lakes, 5 hours drive southeast to New York. Due to the high latitudes and the Finger Lakes effect, it has a large volume of rain and snow. Syracuse has a continental climate with four distinct seasons. Summer temperatures are between 25-30 degrees, winter temperatures are between 0-15 degrees. First snow begins around in November until March, April.

In 2010, the U.S. News & World Report ranked Syracuse number 55 among undergraduate national universities. Its Master’s course of Public Administration was ranked first in the United States has been training a large number of senior officials for the federal, state and local government.