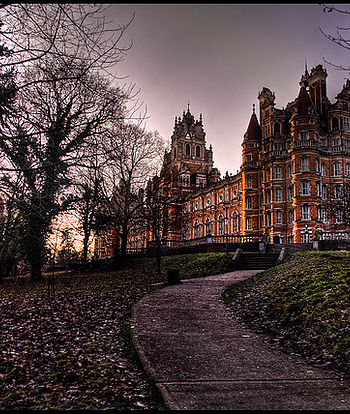 Sports development within the school boasts excellent facilities; a new stadium has been built recently. The total number of undergraduate and graduate students currently studying in the college exceed 5,000. Approximately 20 % of them are foreign students from more than 70 countries.

RHUL is located slightly west of Egham, some 20 miles from the geographic centre of London, with an area of 120 acres, very close to Windsor and Heathrow airport.

The university, in particular, is highly rated for the wide-reaching impact of its research, ranking 3rd in the UK for citations and further cementing Royal Holloway’s status as one of the world’s premier research institutions.

RHUL is consistently ranked in the top tier of UK universities in rankings published by the British media:

The college also offers a number of modular courses and professional research centres. Most professions have a variety of postgraduate taught courses and master’s programmes. Foreign students can study basic undergraduate courses and make the transition to graduate.

RHUL’s study, entertainment and accommodation facilities are all built on the same campus. Learning facilities, including the computer centre (for which a variety of Information Technology courses received an award), are opened 24 hours a day. The library opened in 1994 and is in possession of more than 500,000 books and journals. It can accommodate up to 630 readers. In the past decade, the college has implemented a new construction plan, so most of the departments retain very advanced facilities. Social facilities include a Student Union building, which brings together a variety of entertainment facilities and was expanded recently. The Student Union also assisted in setting up more than 130 clubs and associations. The college has a large sports ground, tennis courts, squash courts and a small stadium, complete with gym. Students may participate in various major sports competitions and recreational sports on campus.

During normal study times for degree programmes, all foreign students can stay in dormitories provided by the college. Building styles of those campus dormitories differ from Victorian architecture to modern architecture, with en-suite facilities. The campus also has some self-catering accommodation. Students who wish to live in the local community can contact the Student Housing Bureau.