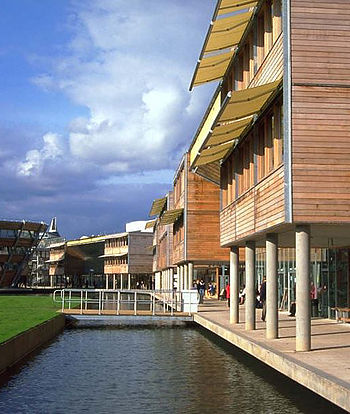 The University of Nottingham is a famous British university, which was built in 1881. It wins international notoriety with its excellent teaching quality, and has been many students’ first choice in applying to UK universities. In 2010, the Sunday Times University Guide ranked it 14th overall amongst the top UK universities.

Nottingham was the first new university granted Royal Charter after World War II. Currently the university has around 22,565 students. 11,435 are undergraduates, with over 4,500 overseas students from 125 countries studying on undergraduate and postgraduate courses.

Nottinghamshire is in central England (known as the ‘Midlands’), and has a population of 300,000. From the university’s Jubilee Campus and University Park Campus to the city centre is only a short ride by bus or bike. The Sutton Bonington Campus to the city centre is 20 minutes by car. Since Nottingham is in the middle of UK, it is very convenient to travel from here to other UK cities and abroad.

Nottingham is recognised worldwide as one of the United Kingdom’s best and dynamic university cities. It is not only a bustling metropolis, but also a historical and cultural hub. The University of Nottingham is only three miles away from the city centre, and their campus occupies 330 acres with picturesque courtyards. The campuses are located in open woodland, surrounded by parks and playgrounds, overlooking Trent Valley.

Strengths and Reputation of the University of Nottingham

In the independent assessment of teaching from the UK Quality Assurance Agency for Higher Education (QAA), the faculties of the University of Nottingham have always been rated excellent. It is also one of the four universities to gain the most research funding from private businesses.

The university libraries have over 1 million volumes of books and periodicals, as well as a large number of manuscripts. Meanwhile, it is increasing its electronic services, including directories, indexes and electronic journals. The libraries are located in several locations, and each location has specialist staff. All libraries have book lending and counselling services. They are open evenings and weekends during the semester.

The University Park Campus Sports Centre offers many sports facilities, such as badminton, volleyball, basketball, football, netball, indoor hockey, table tennis, dance, aerobic exercise, fitness and circuit training. The centre also has a rock climbing wall, a snooker billiards room, an indoor cricket net, a special gym for weight training, seven squash courts and a sports injury clinic. At the opposite side of the Sports Centre sits a modern 25m × 18m indoor swimming pool. Next to the Sports Centre is a floodlit artificial turf stadium for hockey, football and general sports training purposes. There is also a lawn area, which can be used as a training area, three tennis courts and a bowling green. The huge sports ground provides 7 rugby fields, 25 soccer pitches, 5 cricket pitches and 2 hockey courts. By the side of the River Trent, there is a fully equipped dock, and a floodlit football pitch.

The information service systems are equipped throughout the campuses to provide students with computer equipment. Most are open 24 hours a day. The computers are IBM PC-compatible workstations and some Unix workstations. Campus networks connect to workstations, the central server and the national computer network, providing e-mail, file transfer and Internet services. All study rooms and bedrooms have a telephone line and data line interface to connect to the university’s computer network.

Nottingham is also famous for its art and music facilities. Lakeside Art Centre has an Art Gallery, Recital Hall and visitor centre. The art gallery exhibits works of local artists, and a new attraction is the newly opened DH Lawrence Pavilion.

Since there are a relatively high number of applications submitted for a place at the University of Nottingham, entry to the university is very competitive. Applicants not only need to meet the entry requirements, but also pass a recognised English test before they are enrolled if they are not native English-speakers. The following are the most common two English tests, and minimum English requirements for the degree courses at the University of Nottingham.

Undergraduate tuition fees range from around £10,000-15,000 per year, depending on the specific college.