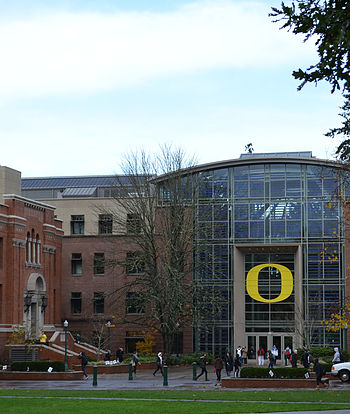 U.S. public universities, ranked 115th ovearll among the U.S. universities. In addition, UO was invited to join the most prestigious Association of American Universities in the North America and became one of 63 members. Its modern campus network won prestigious awards – CAUSE in 1997, and was named one of the best networking universities by Yahoo’s magazines. UO produced many notable people, including two Nobel Prize laureates, 10 Pulitzer Prize winners, 19 people get Rhodes Scholars, 129 people received the Fulbright Award. Co-founder of world-renowned sports brand “Nike” Phil Knight, the U.S. NBC news anchor Ann Curry, Olympic gold medalist Otis Davis, federal judge Helen Fernandez, and Neil Goldsmith and Donald Hodel who were the Secretaries of the government departments in the administration of President Jimmy Carter and Ronald Reagan. According to statistics, the nation’s top 500 rich people, alumni of the University of Oregon ranked second amoung all universities in the western United States, almost equal to Stanford University.

UO has the largest library information system in the state, a total collection of 2,600,000 volumes, not only a member of Association Research Libraries in the U.S., but also an important research centres in the northwest. UO’s modern campus network won prestigious awards – CAUSE in 1997, and was named one of the best networking universities by Yahoo’s magazines.

UO has four museums, including Museum of Art which is a member of American Association of Museums, famous of collecting the art works of Asia and the U.S. Northwest.

In addition, UO’s Autzen Stadium has capacity of 40,000 people, UO’s indoor and outdoor sports facilities are one of the best entertainment venues.