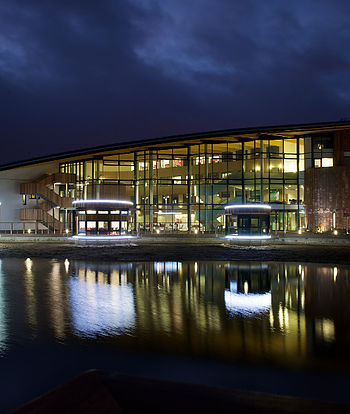 The University of York was opened in 1963, and became one of the UK’s most successful and popular universities. However, the university’s history can be traced back to 700 years ago. During the 1960s, it was named as a new generation university, along with the University of Warwick and University College London. It has become strong competition for the University of Cambridge and Oxford. The quality of teaching and scientific research is reputable at home and abroad.

The University of York is located in the beautiful North East of England. The campus is in a large scenic area, the teaching and residential buildings are adjacent to a lake. There are many historic attractions in Yorkshire, including Europe’s largest Gothic church. York City is situated in the traffic hub from north to south, two hours by car to London and Edinburgh. It is also very convenient to travel to London Heathrow International Airport and Manchester International Airport.

It has two campuses. The main campus is located at Heslington, only 3 kilometers from the city of York, and an area of 200 acres of beautiful scenery. The other campus, the King’s Manor is located in the centre of York, a group of medieval buildings close to the Department of Archaeology, the Centre for Medieval Studies and the Centre for Eighteenth Century Studies. Transportation links between the two campuses are good – about 25 minutes by bus, but riding a bike is faster. The university is only 15 kilometers from the nearest Leeds airport.

The University of York has a first-class level of research and teaching ability. The university has 26 departments, Arts, Sciences and Social Sciences offer undergraduate and postgraduate courses. Its academic research and teaching ability have been always in the top 10 UK universities listings, one of Britain’s most popular universities. Noted for its outstanding teaching and research, 20 out od 23 departments were rated as ‘excellent’ in the teaching quality assessment, and 18 departments received a score of 5 or 5 * in the Research Assessment Exercise. The Daily Telegraph ranked York’s overall assessment above the University of Oxford, only just below the University of Cambridge in 1998. York’s students often say: “Oxford and Cambridge are no big deal”. In the UK, people herald this high education institution, stating such comments are an “academic myth”.

Introduction to the University of York’s Professional Subjects

Top Courses at the University of York

The University of York’s teaching ability and level of research is regarded as world-class, this also reflects its professional strengths and specialty courses.

Its main professional strengths are in IT, Education, Music, Sociology, English Education and Architecture.

The departments rated “superior” at the University at York included Computer Science, Electronic English, History, Art History, Language and Phonetics, Mathematics, Music, Social Policy and Sociology. Some departments did not participate in the teaching evaluation, but at the forefront of the research assessment, such as Biology, Economics, Politics, Physics and Psychology.

Entry Requirements of the University of York

Master’s: Related professional bachelor’s degree, IELTS 6.0 or above (or TOEFL 550 or above). There are certain professional requirements, subject to individual department criteria.

The university has 40 kinds of scholarships, as well as particular scholarships for overseas students.

Study and Living Costs in the University of York

The tuition should be paid prior to the beginning of each academic year. However, payment installments are considered, depending on individual circumstances. If you choose to study in the University of York, you can save tuition, as its academic degree programmes are three years (rather than four). The university can also save you money on accommodation, as unmarried overseas students can rent the campus dormitories during their studies.